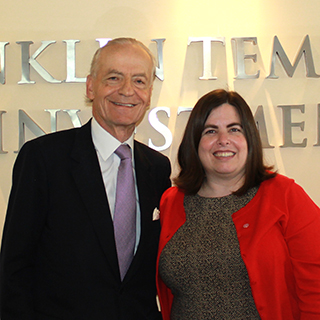 We are proud to announce a collaboration between the Emerging Markets Institute at S.C. Johnson School of Management, Cornell University and Franklin Templeton Investments.

Franklin Templeton Investments has been present in Mexico for over 20 years, and has been investing in the country since the early 1980s. In 2005, the company opened its office in Mexico and, in 2009, the company received a license to operate a locally regulated asset management company. In 2013, the investment team of Heyman y Asociados S.C. joined Franklin Templeton Servicios de Asesoría Mexico and broadened its presence in the Mexican market for peso-denominated institutional investment management.

This article explores the Mexican Peso depreciation and inflation. From 2013 to end-August 2015, the US$/peso rate has risen 29.5%: in 2015, 13.85%. The main reasons have been: since 2011 the fall in commodity prices, mainly oil, since 2013 the expectation of a rate hike in the US, since August 2015 the yuan devaluation. The peso’s status as most traded emerging currency distorts the process. In August 2015 Mexican inflation reached a historic low of 2.59% annual. The paradox between high currency depreciation and low inflation has structural and coincident causes. The structural cause was the flotation of the peso in 1995 and the adoption of a monetary policy with an inflationary objective. Coincident causes have been: the output gap in the economy, fall in commodity prices since 2011, and the loosening of internal energy and telecoms prices. With the parallel of a previous period from 2011-2012, it is possible that there will be significant pass-through from depreciation to inflation in the future. With increased inflation uncertainty, we prefer inflation-linked debt securities (ILS).

Mexico as an Emerging Market

This article explores how Mexico, as an emerging market, has been affected by global influences. From 1994 to 2015, emerging markets (EM) have grown from 22% to 44% of global GDP, and 13% to 26% of global market capitalization. From 2000, EM have grown 50% more than developed economies, and EM 200% vs. 100% developed stock markets. Since 2008, EM stock markets and currencies have performed worse than developed markets. The main causes have been the slowdown in China, fall in commodity prices, probable interest rate hikes in the US, and crises in Greece and China. This “perfect storm” is not necessarily over. But for 2016 higher growth is projected for EM, with, possibly, a positive effect on stocks and currencies. Mexico has been affected by the same processes, and for 2016, higher growth is forecast. It is different from other EM because of its links to the US, its solid public and private finances, and structural reforms. There are still external risks (e.g. Middle East, Ukraine, implementation of Greek bailout and Chinese market support), and Mexican risks (security, corruption, politics).