Students in the Leaders in Emerging Markets course prepared a summary of current news from Kenya, Malaysia and Brazil. 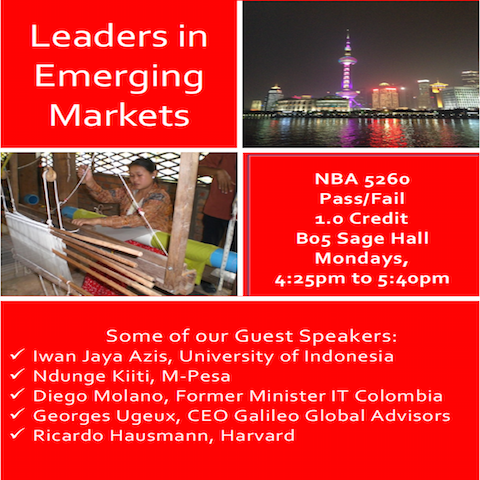 Kenya: A Ray of Hope in the Emerging Markets Downturn

The recent oil price slump has affected many countries including the recession-hit Brazil, Venezuela, and Russia and countries such as Nigeria and Azerbaijan. However, recent newspaper headlines hail Kenya as one economy in Africa that will be able to endure the economic downtown that is threatening other emerging markets on the continent. For example, the Financial Times reported on February 4th that Kenya will come out as one of the beneficiaries of the crash in energy oil prices, and thus, perform well in 2016. One reason why Kenya is expected to be a winner in the energy crash is the fact that it is a major net energy importer, and would therefore benefit from the low oil prices.

As an importer of oil, Kenya has and is likely to continue to benefit greatly from the declining energy prices. For example, in 2013 the amount of expenditure on imported oil into Kenya was 7% of the country’s GDP, but due to the lower oil prices, imported oil expenses accounted for only 4.1% of GDP in 2015, and is expected to cost as little as 1.6% of Kenya’s GDP in 2016. The decreasing oil prices has resulted in a fall in Kenya’s import expenditure, while its gains from exports has continued to climb. This is a significant change from prior years (before the oil prices starting going down) in which imports were rising faster than exports, and has led Kenya’s total annual current account deficit to fall to just 7.6% in 2015, whereas quarterly deficits just a year before were as high as 15%. What’s more is that Kenya has been able to achieve all of this despite political unrest in the country. For example, tourism was hit badly when Kenya experienced a terrorist attack at Nairobi’s Westgate shopping mall in September of 2014, in which 67 people died, and which led to a series of other deadly attacks in the nation’s capital and a few other places in Kenya.[1]

While the rest of Africa is expected to see a slowing down of GDP to about 3%, Kenya has an expected GDP growth of 6% for 2016. While it sees a growth in GDP, Kenya is using up its current accounts to spend on infrastructure, such as on roads, electricity supply, and on a railway. For example, the railway, which is financed through Chinese loans on construction-related imports from China, adds roughly 2 percentage points of GDP onto the current account deficit. In Kenya, the spending that is being done on machinery and transport equipment to fund this project is seen as an investment rather than a consumption because ultimately, the railway is expected to unlock some transportation bottlenecks.

Finally, there are a few other reasons why the Kenyan economy is expected to be resilient in Africa while the economies of other emerging markets in the area are not boding too well.[2] One reason is the stability of the Kenyan currency, the shilling. Although the shilling fell 11% against the dollar in 2014, in the past year, it has been able to remain steady, and is expected to recover more for the better part of 2016. Additionally, foreign exchange reserves in Kenya have risen 12% in the past three months, and the stock market in Kenya has outperformed many of the other emerging markets in Africa in recent years.

Malaysia has a population of 29.9 million people, and a GDP of $338.1 billion with a near eradication of poverty which stands at 0.6%.[3] In the ASEAN region, these are impressive numbers, yet there is an elephant in the room which is not usually reflected in traditional economic indicators. This is the corruption prevalent in the region. Since 2012, Malaysia had been making progress by reducing corruption by 3 points from 2012 to 2014 according to Transparency International’s Corruption Perception Index.[4] The higher the score, the less corruption. Despite efforts of the government to clean up its act, it looks like Malaysia has been slipping and shooting holes in investor confidence in the Malaysian market along with eroding its population’s trust in the political system.

The underlying incident was in June 2015 where 1Malaysia Development Berhad (1MDB), a state fund established to promote foreign direct investment into the country in 2009 by Prime Minister Najib Razak, defaulted on payments of $11 billion only to be rescued by the Malaysian government.[5] Since then, the Wall Street Journal published an expose alleging that investigators have traced approximately $700 million from 1MDB to Swiss bank accounts and finally into Mr. Razak’s personal bank accounts. As if on cue, Mr. Razak’s spokesperson called this a political smear.[6]

In July 2015, Abdul Gani Patail, Malaysia’s former attorney-general had set up a special task force to investigate the alleged corruption and had found evidence that Mr. Razak had received $14 million from a 1MDB subsidiary directly to his personal bank account.[7] Perhaps it is worth noting that after this controversy arose the politicians who criticized Mr. Razak were sacked while news outlets which reported on the alleged corruption had their licenses suspended.[8] The attorney-general retired on health grounds.[9] These events led to an extremely rare demonstration in Kuala Lumpur where citizens called for the resignation of Mr. Razak.[10] Not long after the resignation of the attorney-general, the new attorney-general declared that the money found in Mr. Razak’s bank accounts were merely gifts from Saudi Arabia’s royal family and not a result of corruption.[11]

A 2016 BBC article provides that this incident did not have purely local implications. Singapore’s police force had frozen two bank accounts; Hong Kong authorities started investigating deposits into personal bank accounts while the USA’s FBI are investigating possible money laundering while also pursuing a grand jury investigation- all which are related to the 1MDB scandal.[12] Moreover, on 29 January 2016, the Swiss chief prosecutor announced that in the course of a criminal investigation into 1MDB it had found evidence of a $4 billion appropriation from the fund which may potentially be in contravention of Swiss money laundering laws.[13]

With this type of political instability directly effecting foreign investments into Malaysia, one could say that this scandal has spooked investors. Additionally, very little can be said about the confidence in the Malaysian economy as investors have shied away from the economy despite the local currency, the Ringgit, being at historical lows and the worst performing currency in the ASEAN region.[14] In 2014, Malaysia was an oil dependent nation with 33% of its revenue coming from oil and gas. However, with the current low prices of oil, Malaysia is likely to need foreign investment to sustain development as its capital outflows have increased. Oxford Economics’ Christine Shield expects Malaysia’s economy to slow 0.5% in 2016 from 4.7% in 2015.[15] Additionally, Moody’s has downgraded Malaysia’s rating from ‘positive’ to ‘stable’.[16]

The 1MDB scandal is thought to be one of Malaysia’s worst political scandals. Yet, this should not be seen as all doom and gloom. One interesting outcome of this was that the Malaysian High Court lifted the suspension imposed on media outlets which criticized Mr. Razak.[17] At least journalistic freedom and the free press is alive in Malaysia. Additionally, perhaps there will be a new focus to the need for increased governmental transparency and better corporate governance of state companies to increase the confidence in the political system and reduce systemic corruption and therefore aid its economy.

Zika: Its Origin and Impact

The real concern around Zika started last August of 2015 in the maternity wards of Racife, Brazil. Babies being born with small heads and no foreheads at all, triggered a closer look at a virus that has actually been around for almost 70 years and declared in the past as a benign virus. About a year earlier, symptoms of Zika began arising in Natal, 200 miles north of Racife. Mild symptoms, including rashes, red eyes, fever, and joint pain, were the early signs that caused little to no concern about the virus. Although the symptoms seemed benign, there was no denying that this so called mild virus was spreading as more and more incidents started to arise across more and more states, eventually reaching Salvador.

It was in Salvador, that a virologist eventually guessed that Zika may be a virus transmitted through mosquitos. Zika was a virus being watched for years prior but only in Africa and Asia. The very first discovery of the virus can be dated back to 1947, where the virus was found in Monkeys in Uganda. The virus has been moving east across the Pacific and was found in Micronesia in 2007. By 2014 the virus was in the islands of French Polynesia and then made its way to the Cook Islands and New Caledonia. The virus is still island hoping today and has already arrived in the U.S., with the first case being sexually transmitted in Dallas, Texas. Zika’s arrival in Brazil is thought to have initially been caused by the travelers flying into Brazil for the World Cup in 2014 or the travels from Polynesia coming to Brazil for the Va’a World Spring canoe race.

The first signs that Zika was not a benign virus was the increase in Gullian-Barre cases, a disease that causes temporary paralysis and can be fatal. The next sign, was a set of twins born in Recife, one of which was born with microcephaly, a disease the results in a small head, no forehead, and possible mental retardation. The amount of babies being born with microcephaly has been drastically increasing ever since with one case in the U.S. Mothers who had Zika months prior to giving birth, could then pass the virus on to their fetus. Although the virus lasted in an adult for 10 days, it could still be passed on and it is still to be determined how long the virus lives in a fetus. Although the number of cases is now declining, there have already been thousands of cases and affected child births. The virus is still very present south of Florida and Texas and Guillain-Barre is still being uncovered in even more areas, including Columbia, Venezuela, and El Salvador.

With the 2016 Summer Olympics in Rio De Janeiro, Zika could be a threat to such events in Brazil and Brazil’s overall economy. Zika’s immediate impact could be a decline in tourism, which makes up one tenth of the Brazilian economy. Pregnant women are being allowed to reschedule their flights international flights into Brazil. However, because Brazil’s economy is already suffering, Brazilians are not traveling away to vacation and are staying home, which could in fact, cancel out the loss from tourism into Brazil. Overall, it is predicted that Brazil’s economy has been shrinking and will continue to shrink, but Zika’s impact, compared to the other issues Brazil is dealing with, is not significant enough to play a major role in Brazil’s economic downward trend. Another factor though, is that the minister has asked women to delay child birth and has reignited the discussion around women’s right to abortion and birth control. This could cause a decline in child births and industries related to child births, which could potentially also harm the Brazilian economy. Pharma companies are now racing to find a vaccine for Zika. The first company to have two vaccines lined up and ready for testing is a biotech company in India called Bharat Biotech International Limited. This is the first time an Indian company has beat a Western pharmaceutical company to a drug discovery and patent. The odds are in India’s favor and could be a big win for India as they lead the race to a vaccine with France and Japan.