Anne Miroux, Research Fellow at the Emerging Markets Institute spoke at the international symposium, jointly organized by the School of Economics and Management, Xi’an University of Technology and Transnational Corporations Council of Studies in Canada. 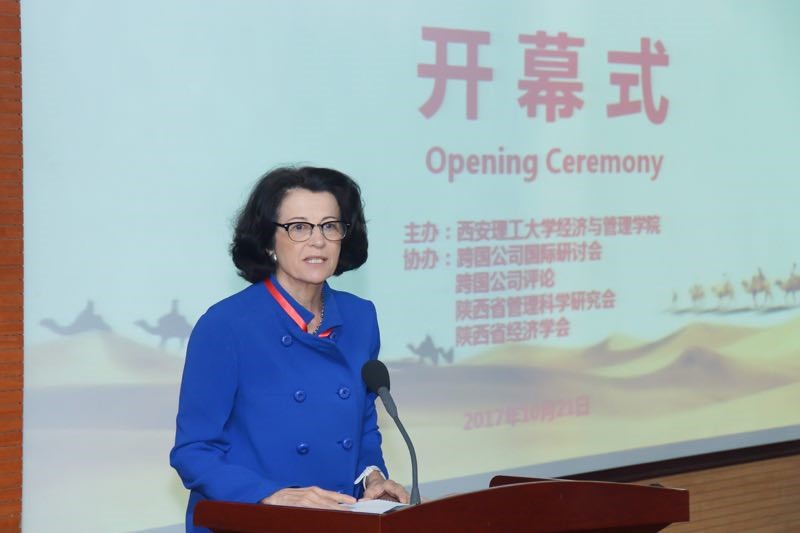 From October 17 to 23, 2017, Dr. Anne Miroux from the Emerging Markets Institute at Cornell’s Johnson College of Management was invited to visiting China, one of significant emerging markets in the world, and spoke to an international conference, jointly organized by the School of Economics and Management, Xi’an University of Technology and Transnational Corporations Council of Studies in Canada. Anne’s visit and speeches were well-received.

During the past fifteen years, the overseas expansion of enterprises from emerging economies, the so-called emerging market multinationals (eMNCs), has been remarkable. Such a phenomenon illustrates the increasing weight and influence of emerging economies in the world. It is bringing about radical changes in a wide array of areas, through the displacement of trade and investment flows, the creation of new business models, and the emergence of a new geography of global innovation for instance. The rise of emerging market multinationals, such as from China, is part and parcel of the reconfiguration the global economic and political order that we are witnessing in these early decades of the 21st century.

With the rise of emerging economies as key outward investors and the remarkable expansion of their multinationals, a new global FDI landscape has settled in. Today, for instance emerging economies account for about a quarter of global outward FDI, triple their share in 2000. Investment from China has played an important part in this process.

The rise of eMNCs is also disrupting the global competitive landscape. For instance multinationals from emerging markets have made significant inroads in the global corporate world, not only in numbers (about a third of the Fortune Global 500 firms are eMNCs) but also in breadth and quality. They have been expanding into new regions (including advanced economies) and new industries. A number of them have become global industry leaders, leading to a change of guard at the top in various sectors. There is some work lies ahead – for instance in term of profitability or return on assets or employment – before eMNCs stand to match or even surpass their counterparts from advanced economies. But all in all, they are on their way to catch up.

In her speeches, Dr. Anne Miroux illustrated all these developments and discussed how the rise of eMNCs is transforming the world.