Over 100 Cornell alumni and business professionals in attendance.

The Fourth Emerging Markets Institute conference “China, Reaching out to the world: Global investments and partnerships,” held in New York City in mid-October was well attended by over 100 Cornell alumni and business professionals. The topics, Chinese investment in the United States, ensuring natural resources, technological hubs and emerging multi-national corporations, were covered during panels held throughout the day at the Cornell Club.

During the first panel, Chinese investment in the US, Thilo Hanemann, Research Director with the Rhodium Group, shared that China’s foreign direct investment in the US totaled $14 billion last year. China’s FDI in the US for the first half of 2014 was slightly lower than the same six-month period last year, and the focus is shifting from acquisitions of assets to real estate, advanced services and manufacturing. Such states as Texas, Michigan, Ohio and Illinois are top recipients of Chinese investment in energy and auto industries.

“On the Chinese side there is a lot of demand to go global, on the US side there’s a good supply of a system that welcomes investments,” said X. Rick Niu, President, Starr Strategic Partners. “As domestic GDP in China goes down, money has to go elsewhere to find a better return, and if you flip the coin you’ll see why America is ideal.”

Niu said the world’s two largest economies want to have a bilateral investment as the US remains “an ideal destination for FDI from China”.

At the close of the conference, EMI Executive Director Richard Coyle announced that planning would begin for next year’s Emerging Markets Institute conference to focus on India and relations with the U.S. 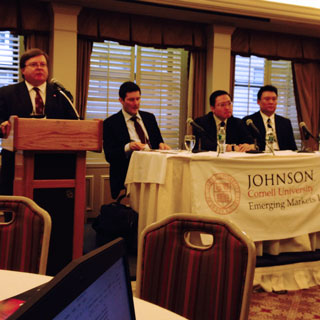