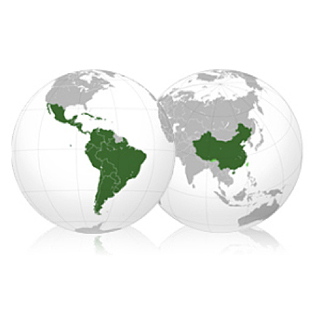 Over the last years the world witnessed an impressive rise of the Chinese influence in Latin America, not only thru high-profile contracts but also large-scale investments: oil-for-cash deals with Venezuela, huge imports of commodities from Brazil and Argentina, billion-sized foreign direct investments in Brazil, Peru, Argentina and Ecuador. Taking into consideration that until recently Latin America has not been a traditional zone of Chinese influence such as Central and Southeast Asia, important questions arise: What are the reasons for such geopolitical and strategic movement? What does China seek in Latin America?

First, China is filling the void of the diminishing United States’ influence in the region. ISIS, Russia and Israel-Palestine conflict demand much more energy and attention that the southern countries in the American continent. Second, weak local leadership provides additional explanation for Chinese growing influence because neither Brazil – Latin America’s main economy, nor Mercosur – regional trade bloc – have provided growth opportunities for Latin economies. This way, China is taking advantage of empty spaces left by region’s traditional historical leaders. Third, there is the center–left bias of current governments: Venezuela, Argentina, Ecuador, Bolivia and even Brazil turned their backs to US approaches. Fourth, Multinational companies from China follow the well-known theory of Eclectic Paradigm of internationalization, developed by John Dunning in the 90’s: China looks for new markets and new sources of resources in order to secure iron, oil, soybean, meat and rare earths, an effect Dunning called resource-seeking strategy. The demand from Chinese companies created what is commonly known as “The Latin American commodity boom”, which, as we just explained, was largely driven by new trade China, and concentrated in the petroleum, mineral extraction, and agricultural sectors. Figure 1 presents current Chinese investment and contracts in Latin America.

A bold bet or a calculated risk?

Although China deals with somewhat risky country, both politically and financially, Chinese investments seem to be well-reasoned for two reasons: countries in the region desperately need to improve its crumbling infrastructure and China is an important destination for Latin America’s commodities. Therefore, a radical decision is unlikely from Latin countries. Table 1 presents main destinations of exports of several Latin countries.

In conclusion, the Chinese dragon has extended its zone of influence and Latin America is one of its targets. Global powers take advantage of voids and China is no exception. In our next article we will discuss the sustainability of the Chinese strategy and its long-term impact in the Latin region.