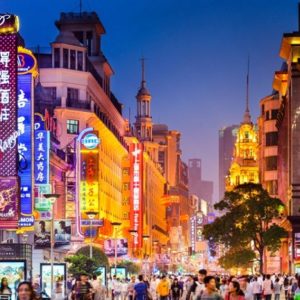 China’s nominal GDP surpassed that of Japan in 2010, becoming the second largest economy in the world. In 2017, China’s annual GDP growth rate surpassed 6%, and its nominal GDP was over $12 trillion.1 Commentators estimated that China would become the world’s leading economy by 2032.2 In 2012, the capital outflow from Chinese companies to acquire/merge companies in other countries was $55.4 billion; that number grew to $220.9 billion by 2016.3 In 2012, there were 73 Chinese companies on the Fortune Global 500;4 in 2017, that number rose to 115.5

In international affairs, China has made a global impact, for example, by establishing the Asian Infrastructure Investment Bank, by implementing the “One Belt One Road” initiative, and by becoming the largest single country contributor to African FDI.6 As China spreads its influence worldwide, “executives will need to think about doing business with China, not just ‘in’ China,” said Professor Xiang Bing, the founding dean of Cheung Kong Graduate School of Business (CKGSB).

During the China Trek, we had an excellent opportunity to observe China’s growth with our talented faculty and classmates. During the eight-day accelerated schedule, we experienced unforgettable moments learning and sight-seeing, such as having lectures given by the leading professors in China, enjoying April snow at the Great Wall, having a dinner cruise on the Huangpu River and bonding with other EMBA and FMBA students.

While unheard of in the U.S., China has benefitted from these conveniences for years. To achieve these features, Chinese firms have skipped the credit card as an intermediate to link virtual wallets directly to people’s bank accounts. Technically, the application is nothing complicated, what made it so distinctive is the regulation difference.

Secondly, because of the density of labor deployment and inventory hubs, Internet companies have made online shopping delivery very convenient. Much of China’s workforce has relocated to the cities, which provides sufficient and cheap labor forces to make quick road delivery a reality

To achieve near-universal mobile pay in the U.S., American banks would have to fight an uphill battle because of the fierce competition within the banking industry itself. It does not seem feasible that a single retailer could equip each payment tool for all of the major banks. Therefore, is quite unlikely for the U.S. to build a similar payment mechanism to that of China in the short term.

It is difficult for foreign companies to gain a foothold in China due to China’s unique market conditions. There are a few established exceptions, such as Starbucks and KFC; however, the only companies that have had lasting successes are mainly dining/food companies. As China has suffered food safety issues, the public has had more confidence in foreign-run entities. As a result of this unique market situation, the food industry is one of the few industries that an external company can penetrate. By far, stock investment is perhaps the most sustainable way to do long-term business in China; the most remarkable example is Softbank. Softbank has invested in many companies that thrive in China, for example, Alibaba.

During the China Trek, we had the opportunity to learn through lectures as well as company and official visits. Our visits with JD.com, Baofu, and to the Yangpu District were my favorite outings of the trip. Although JD.com is a well-established company, it aggressively seeks potential expansion opportunities. This aggressive spirit is very different from many big companies in the U.S., especially relative to Fortune 500 companies. Baofu is another booming company that penetrates the niche market of international foreign exchange payment. Baofu knows itself and the competition clearly; it cannot compete with Alibaba or Tencent in the consumer mobile payment business, so instead it chooses not to compete in the domestic market. Instead, it facilitates currency exchanges with RMB. In other words, it offers a global infrastructure to absorb foreign exchange and RMB on its digitalized platform with deposits all over the world; the company plays the role as a bridge to connect the buyers and sellers of RMB. The company will soon have an IPO at the Shanghai Exchange.

Our visit to Shanghai’s Yangpu district visit was exceptional. The district is home to government offices and mega companies, and it was a fantastic experience to visit and learn how much effort Yangpu has spent to attract companies to move there. On our trip, we had a bilateral talk with government officers and management teams from mega companies who explained how they attract more companies to relocate. For example, Yangpu has built a whole area to accommodate start-ups. It also fully utilized the schools and research centers in the district to attract companies by matching talents from the schools/research centers. These efforts have made the exchange a positive cycle.

Thanks to the China Trek, the staff of Cornell Johnson, and dedicated professor and program leadership, we had a fantastic time. I would recommend that students attend the China Trek to take advantage of a large array of great experiences and resources.