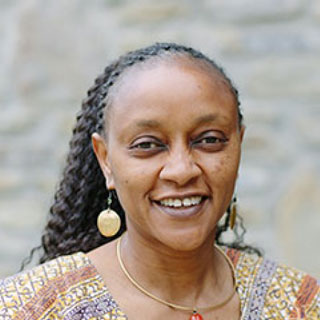 Most people do not associate emerging economies with technological innovation. But Kenya continues to show the world the possibilities of mobile money with the widespread success of M-Pesa, a phone-based mobile technology.

Ndunge Kiiti, PhD ’02 (CALS), spoke about the importance of mobile money in Kenya’s emerging economy Feb. 8 as a guest speaker in Leaders in Emerging Markets, a class offered by Lourdes Casanova, academic director of the Emerging Markets Institute. Kiiti, a professor of international development at Houghton College who received her PhD in communication from Cornell, focuses her research on the use of mobile money by women’s micro-credit credit groups and Kenya’s informal business sector. She is currently a visiting professor at the Cornell International Institute for Food, Agriculture and Development.

M-Pesa is used by 80 to 90 percent of the adult population in Kenya. According to Kiiti, the technology has been a game-changer in the daily lives of Kenyans in rural communities who did not previously have access to banking services: It improves the security of transactions and helps combat the gap between rural and urban living. M-Pesa does not require Internet connectivity to work, greatly increasing its accessibility throughout the country. Kiiti also discussed her research on M-Shwari, a branch of M-Pesa that provides savings accounts and loans for Kenyans. “It’s really a product for marginalized groups,” she said. “Saving is no longer just a privilege of the elite.”

Kenyans can use M-Pesa by bringing cash to agents, who put the virtual money equivalent on the phone. Users can then send and receive money through the phone app to complete transactions. Its range of services includes deposit and withdrawal, bill payment, remittance delivery, and microcredit provision. According to a recent Forbes article assigned to the class before the talk, M-Pesa has grown tremendously since its launch in 2007. In 2013, there were over 237 million transactions through M-Pesa, and 43 percent of Kenya’s GDP flowed through the service. “Kenya is way ahead of the Western world in mobile payments,” said Kiiti.

M-Pesa is especially significant in empowering Kenyans in the informal sector of the economy and providing quick cash flow for their businesses, according to Kiiti. As an example, Kiiti recounted a story about her sister, who owns a farm with her husband in Nairobi. While Kiiti and her sister were driving, her sister received a call from a farm-hand relaying someone’s offer to buy a cow. Upon hearing that the person offered 65,000 Kenyan Shillings, her sister said, “Tell him if he gives me 70,000 and sends it to my phone, he can take the cow now.” Seconds later, her phone beeped, and the transaction was completed instantly.

While M-Pesa has become nearly ubiquitous in Kenya, there is still room for improvement. Kiiti says the company could do a better job disseminating financial education information, which is currently only available in English. Additionally, there are still network connectivity issues in some parts of the country; “Very little investment has happened in our rural areas,” she said.

While mobile money has the potential to thrive throughout the global south, Kiiti highlighted the specific policy environment in Kenya that has allowed mobile money to prosper. The Kenyan government is a proponent of very loose regulation of M-Pesa, because of the opportunity to grow the economy it presents. The emphasis on social networks and community connectivity are among the sociological factors that allow M-Pesa to be so successful in Kenya. “One of the survival tactics in Kenya has been innovation,” she said.

At the 2015 Global Entrepreneurship Summit in Nairobi, President Barack Obama commented on Kenya’s innovative spirit and the importance of M-Pesa: “Today, Kenya is the largest economy in East Africa,” he said. “High-speed broadband and mobile connectivity are on the rise, unleashing the entrepreneurial spirit of even more Kenyans. Every day around the world, millions of people send and save money with M-Pesa. And it’s a great idea that started here in Kenya.”

Katie O’Brien ’16 is an intern in Marketing and Communications at Johnson.